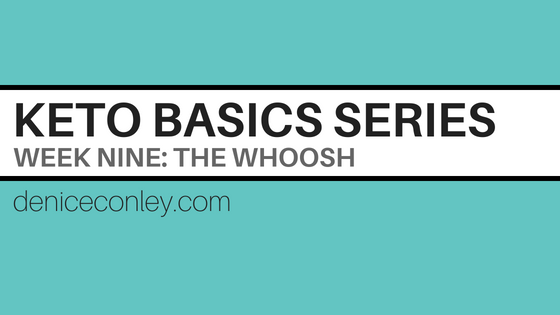 During any weight loss journey, you will have stalls or plateaus.  While they are incredibly frustrating, they’re also absolutely normal!  They can be caused by different things, but sometimes they happen when you’re doing everything right.  Nothing is more frustrating! After the stall, one common experience is what is known as The Whoosh.

What is The Whoosh?

Put simply, a whoosh is when your body sheds a large amount of weight seemingly overnight.  This can be as much as several pounds on the scale from one day to the next. I personally weigh myself at the same time every day and have experienced whooshes of as much as 6 pounds from one day to the next, although it is usually more like 3-4 pounds. But, that doesn’t mean I lost 6 pounds of fat overnight.

Shedding weight and burning fat is a complex process for your body. As your body burns through your fat cells, those cells never actually disappear. Instead, they shrink. But, before shrinking, your body fills them up with water in hopes that you’ll fill those cells up with fat again.  It continues to hold onto the water, sometimes for days or weeks at a time. Then eventually, once it’s realized you aren’t going to refill them with fat, it sheds all that water resulting in a large drop in weight on the scale.  In the meantime, you’ve probably been frustrated that you’re doing everything right but not seeing a change on the scale. When, in reality, you ARE losing fat, but your body is masking that by holding onto water in those newly empty fat cells.

The following diagram has made its rounds in the keto community and is the perfect illustration of the whoosh effect.

Signs of a whoosh

Before a whoosh, there are several signs that are commonly experienced:

If you’re experiencing some, or all of these signs, don’t give into the frustration.  Remind yourself that a whoosh is probably on it’s way.

It is important to remember that you’re not going to lose weight every single day.  Weight Loss is not linear and will ebb and flow from day to day. That is not only normal, but also healthy!  You have to give your body time to adjust to the changes it is making. Just because the scale isn’t moving, doesn’t mean you aren’t burning fat! Stay the course and you should see an overall downward trend on the scale.

3 Replies to “The Whoosh”