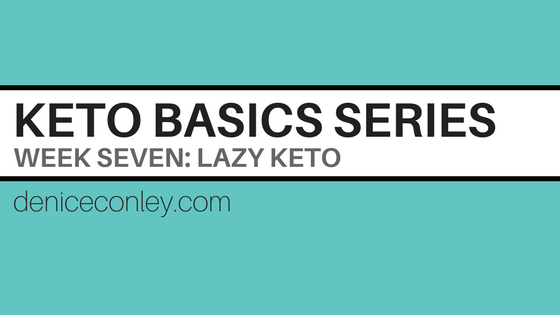 Last time I talked about tracking your macros and how important that is in the beginning.  When you’re first starting out, you really should be tracking everything.  But, once you’ve done it for a while and gotten the hang of it, you can transition to what’s called lazy keto.  And that’s what I’ll be talking about this time. As with anything, there are pros and cons to it, so let’s dive in!

First things first, what is lazy keto?  Everyone seems to have their own definition of exactly what lazy keto is, but for most, its not tracking your macros and sticking to them perfectly.  It means you keep your net carbs at or below 20 grams per day, but do not limit your calories or strive to meet your fat and protein macros at a consistent level day after day.  Usually, this means you aren’t tracking what and how much you’re eating but instead, are just eating keto approved foods and keeping your carbs low enough to stay in ketosis.

On the flip side, lazy keto DOES NOT mean your “keto-ish” and eat keto sometimes but not others.  Doing so will only result in you being frustrated and eventually giving up as you won’t lose weight and will constantly be putting yourself in and out of ketosis.  Usually bringing all the negative side effects of doing so along with it. In reality, you’ll most likely gain weight instead of losing it. Being keto-ish, really is a recipe for disaster.

There are plenty of people out there that will say you have to track everything all the time and you aren’t keto if you don’t.  They are the “keto police” and will tell you that eating 1 bite of something that has 1 ingredient that isn’t keto means you are a failure and aren’t keto. Unfortunately, I personally think they do more harm than good for the ketogenic lifestyle, but that’s another post for another day. Just because you don’t know the exact numbers of your macros, doesn’t mean you aren’t keto.  What the ketogenic diet really boils down to is putting your body into a state of ketosis and you can absolutely do that without knowing the numbers of everything you eat.

But does lazy keto work?

If you don’t track all your macros, can you still be in ketosis and lose weight? Absolutely! Will it work long term? Maybe, maybe not. Most people are successful with lazy keto in the beginning.  They’ve probably gone from eating a standard American diet loaded with processed foods and carbs in the form of grains and sugar to not eating those things at all.  They are now eating whole, fresh foods, losing weight (usually rapidly) and feeling better. But eventually, that rapid loss will slow down and even plateau.

Track!  Sorry, it’s probably not the answer you’re looking for.  Tracking sucks. I get it. I hate doing it too. But when you’ve hit a plateau, it’s really what you need to do. Any time you hit a plateau, and you will, start tracking until your loss picks back up. Even if you have decided to do lazy keto, you should really be tracking periodically.  It will help to keep you accountable and will help to keep food quantities fresh in your mind so that you are continuing to eat what (and how much) you need to in order to be successful. That can mean being lazy keto for a few weeks and then once a month tracking for a week just to keep yourself in check.  It can mean tracking only once a week and being lazy keto the rest of the time. Do what works best for you! But know that being lazy keto 100% of the time long term without ever tracking, can be very difficult. That doesn’t mean it’s impossible to do. I’ve seen plenty of success stories of people that have never tracked once and have been lazy keto since the beginning.  But those stories are the minority. So be open to tracking periodically and you’ll set yourself up for success in the long run.

As of this post, I have personally been keto for 2 years and have lost over 65 lbs.  In the beginning I did that by being very strict and tracking every single thing. Once I was comfortable with what I was doing, I switched to a more lazy keto mentality and do not always track everything every day.  But, I still do track periodically! Instead of tracking everyday, I track once or twice a week. It keeps me in check and holds me accountable, but also allows me to live life without feeling like I’m a slave to my diet.  This is what has worked for me. But, just as with any diet, keto is not one size fits all. Make keto work for YOU and your lifestyle.